i would like to enable, RNDIS mode, on EM7455,
will serial ports on ttyUSB0-2 still be avaible (for AT commands) in RNDIS mode?
here is my !USBCOMP

didn’t you already set it?
How is your test result?

i havent set it yet. i want to do it, but im not sure if the ttyUSB* will still be there, and im not sure if
echo VID PID /sys/bus/usb-serial/ will work to re-enable it.

i don’t see such option in AT command use guide: 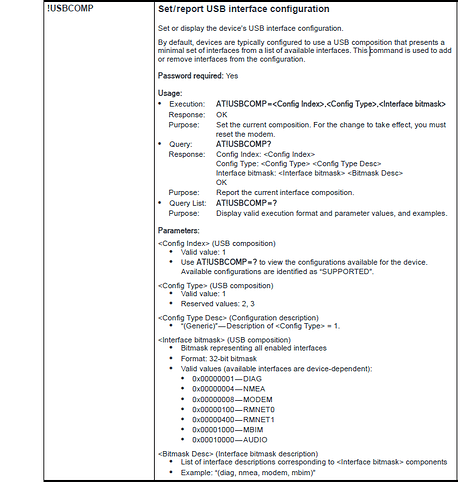 ok, then i don’t think you should use it

Yes, you can try the old Gobi drive on RMNET interface(QMI)

i dont think i’ve looked at that doc. yet, ill do it now.

BTW, what kernel version are you using?

You don’t explain why you want a dhclient or udhcpc lease, so I suspect that is based on some misunderstanding. IMHO, you should never use DHCP to propagate IP address configuration from modem firmware to host, even when supported (which it is not on the EM7455). Using DHCP here is an ugly hack, and can never work as good as the native (QMI or MBIM) methods.

You mean your host platform is kernel v3.10?

ive seen a commercial device like this for a kiosk, with this exact capability, and it had em 7455 in it.
i think those devices might’ve ran as cdc-either, but im not sure.

i dont remember the company name that had that product.
i want to be able to reproduce that same network behavior.

Which doesn’t mean it can’t be done. Just that it’s not supported. And I’m will to bet more than one beer that no one else has tried, so you’ll have the pleasure of being the very first guniea pig. Might still survive - who knows?

thank you for the encouragement

EM7455 is running a bridge internally (can also be put into NAT), this is the bridge from inside of EM7455:

it also has rmnet_data0 which can be brought up. rmnet_data0, is the interface thats connected to the service provider, it gets all the correct ip,dns etc… (so theres no need for the host OS, that EM7455 plugged into, to have a modem manager)

i think this might be a qualcomm thing, as it has QCMAP_CLI command (in ADB), which switches on a few things.