BC127 very slow to respond to AVRCP commands?

I am attempting to develop an application for a BlueCreation BC127 bluetooth module and I am running into trouble with the testing and development.

The purpose is to use the BC127 in “Source” mode, streaming audio from a third party music player, via bluetooth A2DP, to a car stereo headunit so that the audio from the BC127 comes out the car speakers. I intend for the BC127 to receive the AVRCP commands from the car stereo head unit when the user presses things like Next, Previous, Pause, and Play, on either the headunit’s touchscreen or steering wheel. Then when my development board sees those commands arrive as notifications on the BC127 serial port, then it will use a different serial port to send appropriate corresponding commands to the third party music player.

I am able to connect to the BC127 and issue commands via serial terminal. I am also able to upgrade the BC127 firmware with a DFU upgrade, I have upgraded it to Melody version 6.1.5, which is the latest one found on this site: bluecreation.com/firmwareupdates.php

For configuring and monitoring the BC127, I am following the BlueCreation manual for the Melody firmware found here: bluecreation.com/MelodyAudi … ction.html

I have also restored the BC127 to factory default settings with the development console serial terminal commands:

When I pair the BC127 with my test vehicle, which is a 2017 Honda Accord with a factory headunit, A2DP audio streams correctly (on link ID 10) and the BC127 registers that an AVRCP connection exists (on link ID 11). So far so good, but I notice the BC127 exhibits the following problems:

The above problems do not occur when paring different bluetooth devices such as smartphones to the same headunit (the AVRCP commands are received instantly by the smartphones), so the issue is not caused by the head unit.

I have noticed that if I issue the following commands from the development console:

… then the car headunit detects the change, and its touchscreen changes to a simpler mode where there is no track metadata on the screen. At this point the “Next Track” and “Previous Track” features work instantly. Though this is not a successful workaround because the “Play” and “Pause” buttons still do not work, the corresponding “AVRCP_PLAY” and “AVRCP_PAUSE” commands still never reach the BC127. Also, it is not a successful workaround because my intention is to continue development to include track metadata, so I do not wish to use the “OLD_AVRCP” mode, I want to use the new mode that includes track metadata.

Additionally, the head unit is stuck in “Pause” mode and its audio is muted, even though audio streaming is successfully occurring. If the user presses either the “Play” button or the “Pause” button on the on stereo headunit, nothing happens and no commands are sent to the BC127 so there is no way for the user to bring the unit out of “Pause” mode or to unmute the audio.

If I issue the following command at the development console:

Then the head unit goes out of “pause” mode and begins playing the streaming music, and the BC127 receives an “AVRCP_PLAY” command on its serial port. After that, pressing the pause button on the car stereo headunit works… exactly once only, and then neither play or pause works after that, and the head unit is stuck in pause mode again. I have to issue another command at the development console to unlock it again.

This is also not a successful work around because it requires the development console to resume the music after the user has pressed the pause command on the car stereo head unit. Though I could develop software to keep reissuing the command, it would mean that the user is never able to pause the music and his play/pause buttons don’t work as intended: It’s a catch-22.

This whole situation is pointing to there being some kind of bugs in the BC127 firmware. Either that, or I am missing some crucial configuration or setup command that I must issue to the BC127 to fix this, however I would think that the factory settings (which I restored, above) would be sufficient for this to have basic functionality.

Note that I also had similar problems when the BC127 was running earlier version 5 of the melody firmware, before I performed the DFU upgrade, so this isn’t specific to one version of the firmware.

Can anyone help me with this?

Do you have a log file such as the below showing the issues?With regards te below it is all pretty instantaneous so comparing the config would be useful.

Matt, thanks so much for the reply and for the astute questions.

To answer your specific questions:

I have not tried connecting a smart phone to the BC127 yet because that would be Sink mode, i.e., phone-to-BC127. The particular issues I’m encountering are in Source mode, i.e., BC127-to-stereo. However I agree that it would be a good diagnostic step to help determine if the problem is limited only to Source mode. Also I should try to get data from other devices I can stream to in Source mode besides the car stereo, such as stereo receivers, bluetooth speakers, and bluetooth headsets. I will endeavor to get data on all those things and report back.

I"m not using the Discovery kit, I’m using this SparkFun board because it had the audio I/O jacks and their necessary supporting circuitry already built in. This board does indeed contain switches on each of the hardware PIO lines. Again, I was in Source mode which I think means that the switches shouldn’t have any effect, but I did see the following behavior: In version 5.x of the Melody firmware, the play/pause switch (PIO 2 I believe?) caused the “AVRCP_PLAY” and “AVRCP_PAUSE” commands to appear on the BC127’s serial port. I think that none of the other switches had any effect in Source mode on either firmware version, and that the play/pause switch had no effect in firmware 6.x. I have a note to myself to retest the switch behavior on version 6.x of the Melody firmware and report back. In all cases, holding down the PIO 0 switch while applying power has been successful at resetting the unit to factory default.

I’ll definitely get a log of the configuration and status and post it here as soon as possible.

In the meantime, something else occurred which makes me think that the whole thing might have just been a bad chip. My chip recently stopped responding on the serial port altogether. I’ve overnighted another one of those boards in hopes that had merely gotten a bad unit and that all problems will be solved if I just replace the unit with a new one. I’ll have it hopefully tomorrow and be able to retest everything discussed above.

The disckit (link below) also has the audio lines lead out to jacks, I will try to test between two BC127’s, one in sink the other in source to check out the AVRCP channel response times.

Ok so I got it working semi reliably and whn it does work it is pretty instantaneous. One of the secrets is to make sure there is no TWS enabled on the unit.

And the sink is

Thanks for that information. I will snag one of those disckit boards for continued development.

In the meantime I got a replacement one of the sparkfun boards, upgraded it to Melody 6.1.5, and though its serial communication is working again, it didn’t solve the original “slowness” problem.

I haven’t been able to do the following things yet:

However, I did get a log of the behavior and the config. Here is the log. Please note that the commands at the top are my baseline configuration, coming in from my development code, for what I want the board to be doing as a baseline for compatibility with the third party music player device I’m trying to interface with.

I find one interesting difference between your config and mine.

Regarding the other tests:

I just received a BC127-DISCKIT board. Pricey little guy. Very nice that it comes with the FTDI chip built-in, so all I had to do was plug in the USB cable and fire up Putty.

It came with melody version 6.0.40 installed, and it paired up with the Honda stereo quickly. I made no configuration changes, I just took the configuration as-is and watched status in the terminal.

Pause and play buttons do nothing, next/previous track buttons either do nothing or they take forever for the AVRCP commands to show up on the serial terminal.

Below is my first session with the board, at its default settings, paired up with the Honda, and the first set of commands I issued.

Note that in the listing below, the “AVRCP_FORWARD 11” and “AVRCP_BACKWARD 11” messages took anywhere from 10 seconds to 30 seconds to appear on the screen after I pressed the corresponding buttons on the Honda stereo.

What I conclude from this is that the BC127 chip and its melody firmware is incompatible with the Honda stereo. It’s some kind of protocol bug. Are you guys aware of this problem? Is there a way you can test it?

What do the Dip Switches on the BC127 DiscKit board control? They’re not documented in the manual and not on the schematic.

What DIP switches? There are only jumpers on the board. The schematics are available at the link below.

With regards the Honda, difficult to test unless we have one.

These dip switches here in the attached photo. They are labeled “SW1” on the PCB but I can’t find them documented. 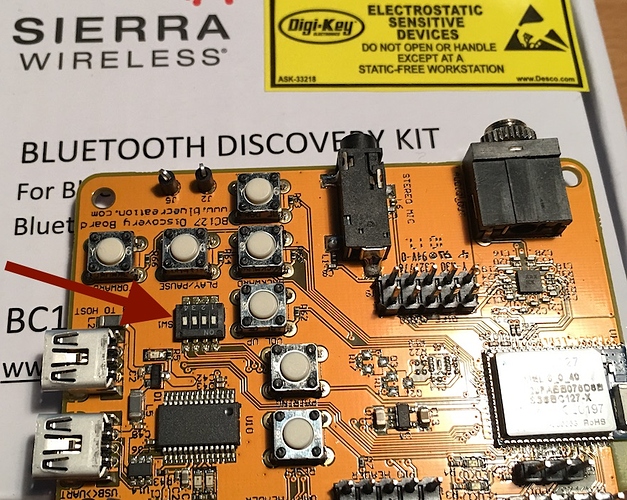 We didn’t like the DIP switches so changed them to be jumpers on later versions of discovery board. So in the schematic referenced J12 is in place instead of the DIP switches

Regarding your earlier note that you don’t have a Honda to test against… Since I’ve got one, but I don’t have a way to debug the bluetooth communication channel directly, is there any sort of additional bluetooth diagnostic or test method that we can arrange between us so that we can get to the bottom of it? I think it might be in both our best interests: You want a chip that is compatible with all BT gear, and I want to build a device that is able to make use of the chip.

You would need to run a Bluetooth sniffer to see what the communicaton is between the two and try to get it in wireshark format, there loads of sniffers on the net.

I have same problem when connecting to Nissan Rogue 2016. I can do forward backward, pause, but play doesn’t work. Melody 6.1.5. I see that there was a bug that was fixed with Melody 5.7 with AVCRP PLAY. I wonder if that migh cripple back in Melody 6

I just downgraded to Melody 5.8. And play pause works with headset. I don’t think i will be able to connect to car since it requires pass code which i think we can only set with PASSKEY and SSP_CAPS . So its definitely bug in melody 6. Still not sure how open support ticket. How do we open one?